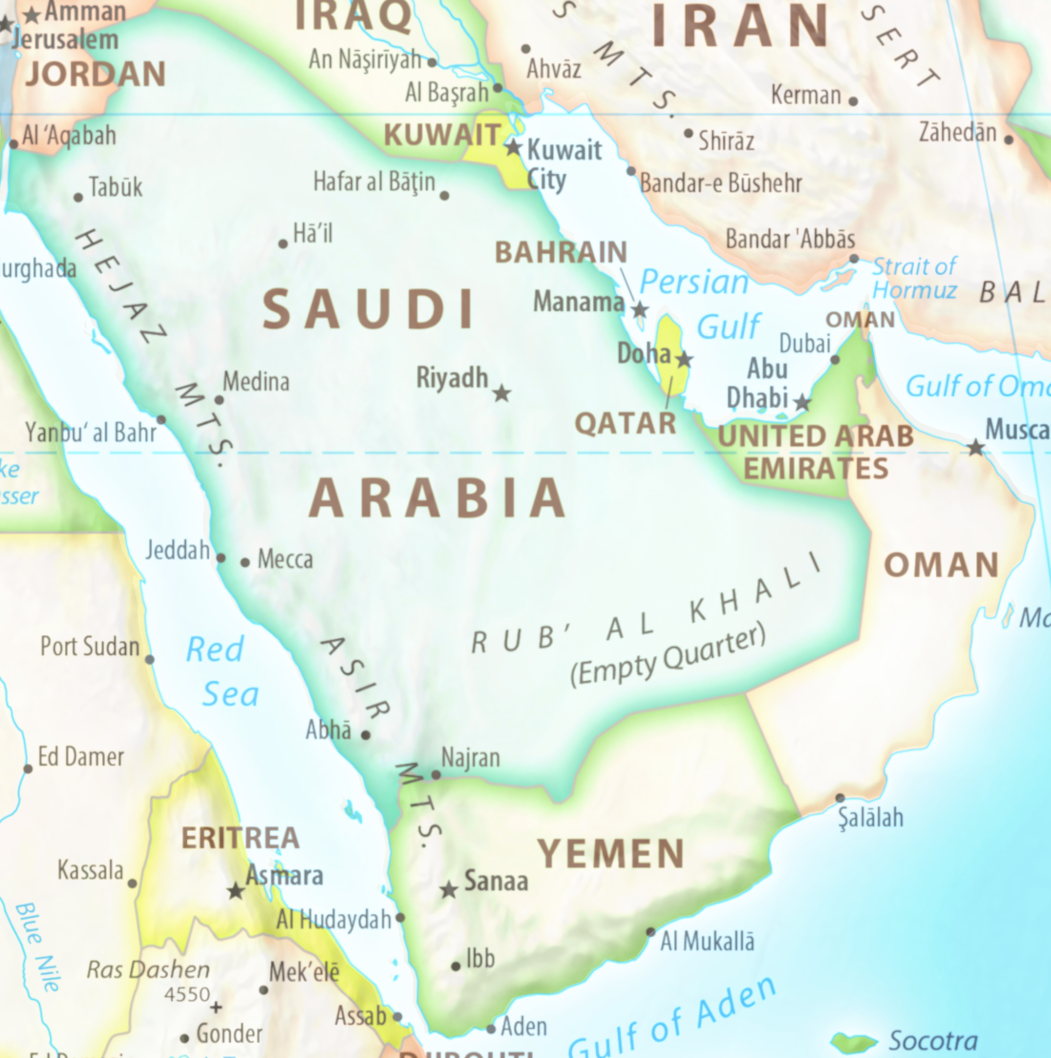 The largest state on the Arabian Peninsula, the eponymous Saudi Arabia, has dominated the region’s news in 2018, largely due to the progressive consolidation of power by Mohammad bin Salman, a prominent princeling of the Saud family, who has been the heir apparent for the past two years. While his political regime is interesting, his central role as the brand manager-in-chief is emblematic of larger trends already in full swing throughout the peninsula.

Before we consider the changes ahead, let’s take a snapshot of Arabia as it stands, politically and economically[1]:

Saudi Arabia: Founded as the alliance of Muhammads al-Saud and ibn Abd al-Wahhab, the state upholds this uneasy partnership of monarchy and theocracy. The largest st 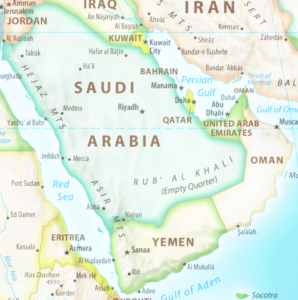 ate on the peninsula, it also achieved early petroleum-based success, largely due to the size and nature of its reserves. Continues to serve as a pilgrimage center, as it is home to Mecca and Medina, though the capital is the Saudi’s original base in Riyadh.

Former Trucial States (Bahrain, Qatar, UAE): A variety of emirates, most notable among them being Dubai and Abu Dhabi in the UAE, Bahrain, Qatar. These states spent until the mid-20th century under protection of the UK, primarily so the Empire could develop on and exploit their oil reserves and as trade ports and navy depots.  Notable for their majority ex-patriot population and veneers of grandeur with an underbelly of poor working conditions edging towards slavery.

Oman-The only state with an Ibadi[2] majority, this sultanate has stayed significantly more isolationist in modern times, only opening in 1970. It has since joined the other Arab states as a large oil producer, though its recent entrance to world trade has kept it as a smaller, albeit fast growing producer of petroleum and natural gas products.

Economically, the success of all of the states throughout the 20th and 21st centuries has been petroleum and natural gas production and, in Saudi Arabia’s case, refinement. For the first fifty or so years after the discovery of oil on the peninsula, Western countries, notably the UK, USA, Netherlands, and France have held large stakes in the state-owned oil companies of the gulf.  Petroleum and natural gas exports make up somewhere between 30 and 40% of all of the GDPs of these states, as well as upwards of 70% of government receipts[3].

Suffice it to say, oil, by and large, still runs the Arabian Peninsula[4].

But two questions have risen as the key economic, and often political, challenges to the modernity and success of these, and many other, energy-rich states:

“How do we best get at the oil in a way that allows us to reap the benefits?”

“What about when the oil wealth runs out, or demand for oil drops precipitously?”

The first question was answered well across the past half century, to varying levels of success. A policy of Arabization(or –ization for each other nation), has been in place for the past 30-odd years. This policy stems from the reality on the ground in the 1930-50s, when oil was first discovered across the region. Where black gold spewed from the ground cowboys and lords come calling. Europe, though most notably the British, followed by the Americans, had their interest piqued by these new, seemingly limitless reserves.

And so, when it came time to actually get the oil out of the ground, the British and Americans showed up and… facilitated. The issue basically boils down to a skills gap. Saudi Arabia, and all the others simply did not have the skilled laborers to run the well and refineries, as they had only existed in their current form for a short time, and a modern university system was by no means in place as it is today. This led to large European shares in all nationalized oil companies in the region. Aramco itself stands for the Arabian-American Oil Company.

Through the latter half of the 20th century however, as a larger and larger percentage of their work forces began taking part in the oil industry and public education funding increased dramatically in all of these monarchies, almost all in the 1970s, under young or new rulers[5], in an attempt to move the countries away from European dependence.

This shift to Arabian workers running Arabian oil companies occurred in two main thrusts. First, the countries bought out the foreign interest in the oil companies to varying degrees. In Saudi Arabia, this meant buying out the Am in Aramco, while across other states, Dutch Royal Shell or British Petroleum needed paying off.

While large contingents of ex-pat workers remained after buyouts, the percentages dwindled across the board to the present. However with this, as with the current trend towards a more diverse economy, result have been scattershot. In this first wave, the Saudis have been the most effective. They’ve largely been able to replace the ex-pat workforce in Armaco with Saudi citizens, leaving about an 85/15 split between them. Saudi Arabia also, of course, has the largely possible workforce vs its oil reserves.

In general, the smaller and denser states have had a tougher go of YOUR_ARABIAN_COUNTRY-izing. Qatar and the UAE have poured resources into education and instituted public hiring policies and quota systems for private companies, but the results have been fair at best. Qatar in particular, even considering its wealth, is only about 83 percent Qatari, and has even smaller percentages in the workforce. Furthermore, foreign workforce replacement belies the real issue in the region.

The second question is one that all mineral rich countries, especially ones utilizing mineral wealth to develop their endemic economy from a subsistence or agriculture to industry or service, have to answer. Due to a variety of factors[6], many states come up against the essential instability and ephemerality of mineral wealth, and collapse. The core issue is that most local economies are not able or allowed to become sustainable enough to stand without the support of mineral wealth by the time the mineral wealth is gone or has otherwise declined in value. For Bahrain, the first is the greater concern; for Saudi Arabia the second. This mostly boils down to a difference of warning. Those groups with more limited mineral supply have advanced knowledge of the end of the mineral support of their economy, whereas states with massive reserves, like Saudi Arabia, need to plan for some unspecified date in the future.  This has meant that Bahrain, whose oil reserves are miniscule amount compared to their neighbors, has had to plan for the very certain end date to mineral economic boosting.

Due to this, Bahrain provides one possible path forward for some of the states on the Arabian Peninsula. Bahrain’s economic stabilization plans largely have revolved around transforming the city state into an Arabian financial center and developing a petroleum-based manufacturing sector.

Both have been fairly successful.

Bahrain has been named the fastest growing financial market in the world for several years, and its work in Islamic Finance[7] places it as well as its geographic location does to be a center for the funding of other Arabic states’ transition plans in the future. This has led to extreme growth in Bahrain’s banking system, which in turn has allowed money to flow more freely throughout its growing private economy. This flow will be integral as the state takes future actions to ensure long-term food security and government funds for education, which will be integral to creating new industries in the future.

The first of these new industries was, unsurprisingly, a petroleum related one. Bahrain has built up a burgeoning manufacturing economy driven by hefty importation of crude from far more oily neighbors.[8] This, along with a small aluminum production economy, has allowed Bahrain to move away from its minimal oil wealth rapidly and establish itself as a prosperous city-state a la Hong Kong or Singapore.

That’s kind of the point isn’t it? Bahrain has been successful in its attempts at transitioning out of a petroleum export economy and into an economy driven by manufacturing and finance. If a small country with a piddling oil reserve can do it, certainly the regional power can. Right? As long as the process is started with enough endemic capital (due to control of the country’s own extraction industry), then the process of transition will likely be a successful one?

[1] Yemen has been excepted due to the economic collapse driven by the civil war and the years long Saudi bombing of infrastructure and economic targets.

[2] Ibadi is one of the three old branches of Islam still practiced today, alongside Shia and Sunni . Think of it like a tolerant, yet fundamentalist orthodox version of the religion. If I were to come up with a Christian comparison, I would suggest something akin to Greek Orthodox, but that’s loose at best.

[4] This doesn’t mean oil is the only, or even majority of these economies or polities; it simply means that its export drives them.

[5] Sultan Qaboos in Oman, King Khalid in Saudi Arabia, and with the independence of the UAE, Sheikh Zayed

[6] Including, but not limited to, global trade pressure, predatory imperial meddling, state instability, core social disagreements that pop up once everyone has a full stomach, and, as always, demons.

[7] Islamic finance is a branch of finance and Islamic law that focuses on banking that prohibits usury and expects the avoidance of ambiguous(uncertain) outcomes, which in this case means certain types of financial instruments and speculation . Its systematized form is very useful for Islamic majority states.

[8] Crude oil now accounts for over half of Bahrain’s imports.

[9] As the question mark implies, the case is definitely not closed. PART II